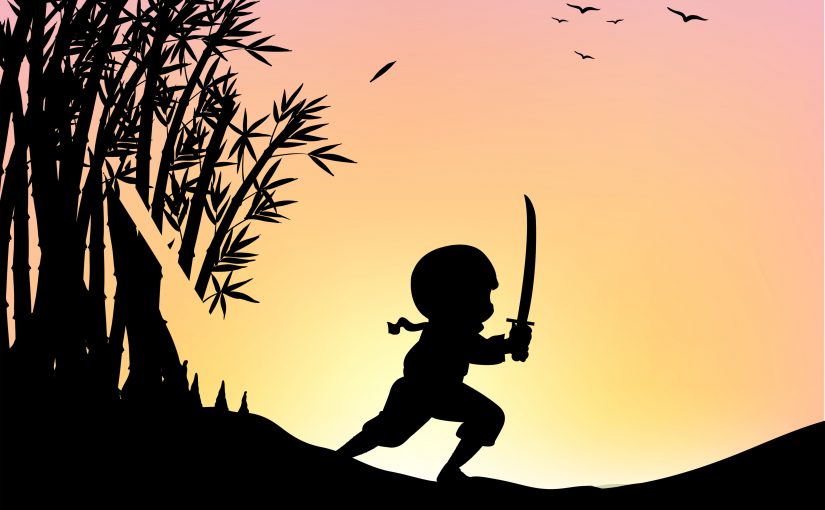 Last week I had an experience that prompted interesting reflection for me about the importance I attach to what other’s think of me. My little girl was invited to a fancy-dress birthday party for a 6-year-old friend.  Normally these parties involve a mix of girls who dress as princesses or fairies and boys who dress as superheroes or villains. My daughter has, thus far, shown no interest in princesses or fairies and has always joined the boys in the superhero camp. Sometimes its Spiderman, other times the Hulk. Last week she was a ninja.

When we arrived at the party we were greeted by a squealing sea of sparkly, excited princesses, including the mother of the party-girl! Unlike all previous parties, there were no boys. Suddenly this made my little ninja, dressed from head to toe in black and sparring imaginary adversaries, so much more conspicuous. The biggest of the fairies (the party-girl’s Mum!), to be fair, took this in her stride and was delighted to welcome a ninja to the party. The little ninja herself dived into the fairy sea with a nonchalant wave goodbye to me. I must admit, for all that I love her spunky, funky nature, in that moment as I left her I wished she liked princess dresses … not because I want her to be like everyone else but because I know that being different can be difficult.

I pride myself in swimming against the tide. I’m not that bothered by what people think of me … or at least that’s what I tell myself. Why then, did it bother me when I saw my little girl standing out from her counterparts? Why was my stomach churning and my mind constantly straying back to her for the next two hours while she partied and I fretted?

At the simplest level, it was probably just maternal instinct kicking in … a desire to protect my little girl. I imagined that maybe she might realise that she was different from her friends which might upset her or that the princesses might keep their distance from this scary little ninja. In truth it probably reminded me too much of times when I didn’t feel like I fit in and reignited old insecurities. I have always felt a bit like a square peg in a round hole and, whilst I’ve come to embrace my “squareness” as I’ve grown older, it was quite the inconvenience when I was younger.  I never felt particularly interested in the sorts of things in which other people seem interested. As a teenager, conversations between my peers about the latest pop sensation or hottest actor always left me baffled because it seemed at the time that it was a teenager’s job to care about those things and I just didn’t. From school to college to the workplace, I never quite felt like I fit in and, to be frank, I didn’t like that feeling. I wanted to be like everyone else who seemed normal so I wouldn’t feel so odd. Unlike my little ninja, I didn’t have the courage to be who I wanted to be. In fact, I’m not even sure I knew who I wanted to be. As a result, I spent most of my time trying to fit in and trying to be interested in things in which I wasn’t interested rather than figuring out what I did like for myself. Maybe that’s the way most people spend their early years. Maybe we all go around feeling out of place. Maybe some people are just better than others at looking like they know what they’re about. As I grew older I began to understand more about what drove me and to understand my purpose and that certainly made it easier to feel comfortable on occasions when I stuck out from the crowd. I have huge admiration for people who aren’t afraid to buck the trend or go against the grain in the interests of being themselves … like my little ninja.

As I think about this issue, I am reminded of the book The Chimp Paradox by Steve Peters. The book opens with a simplified explanation of brain function, focusing on the evolved, frontal (Human) brain functions and the more primitive, limbic (Chimp) brain functions and the remainder of the book provides guidance on how to reconcile the constant struggle between the Human and the Chimp. One of our primitive (Chimp) urges is to seek safety, which can usually be found in groups or troops. The best way to fit into a troop is to be as similar as possible to the other members of the troop, reducing the chance of rejection. So perhaps the desire to fit-in has its roots in a primitive urge?  Peters proposes that managing your impulsive and emotional Chimp as an adult will be one of the biggest factors in determining how successful you are in life. As I’ve grown older and discovered who I am, the anxiety associated with not fitting in has certainly eased. Maybe that’s how it happens for everyone? I look at the younger generations today who seem to have oodles of confidence and self-awareness and I am in awe. Are they really that confident? Or do lots of them feel like square pegs in round holes too and just do a much better job than I ever did in covering it up? It seems to me that there is a much greater acceptance of people being different these days. Being nerdy now appears to be cool. Young people don’t seem to be afraid to stand out from the crowd. As a society are we becoming more accepting of difference? Are my reactions to “being different” just remnants of an old-fashioned view of the world?

As for my little ninja, when I collected her from her party and tentatively asked her how it went I received an enthusiastic “Awesome Mum, very awesome”. Awesome indeed.

This experience prompted me to reflect on how my reactions have changed as I’ve gotten older. I live a pretty conventional life …  but I like to think that I can be pretty unconventional when I want to be. I found great freedom when I stopped caring about trying to fit in with everyone else, but it certainly felt a bit uncomfortable in the beginning. It also prompted me to wonder if maybe there are times when I still shy away from being different? And most importantly, how do I make sure that my hang-ups don’t influence my little girl’s view of the world.

Are there times when you change your behaviour for the sake of fitting in? Sometimes this is a necessary part of maintaining harmonious relationships within the workplace or the home. But might there be times when you compromise too much for the sake of fitting in? Only you will know! And sometimes it doesn’t have to be one or the other. A ninja princess could be an interesting option!

10 thoughts on “Ninjas and fairies … Does it matter what people think?”