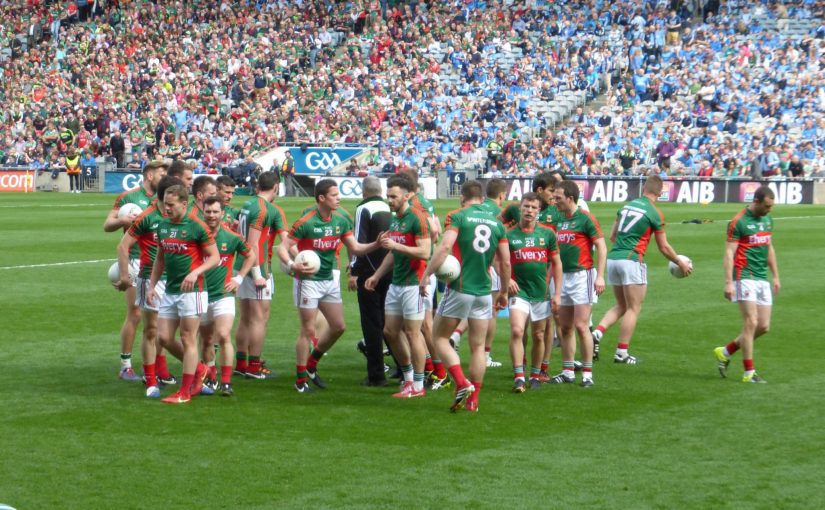 This day last week was a great sporting day in Ireland, with the All-Ireland senior gaelic football championship final taking place between  Dublin and Mayo.  (For overseas readers, if you want to know what gaelic football is, look here for an overview. And if you think that’s mad, then watch the overview of our other national game, hurling, here! Contrary to what these clips depict, lots of women play the games too!)

The All-Ireland football final is to the Irish what the Super Bowl is to the Americans …  a big sporting event. Over 82,000 fans are packed into Croke Park Stadium and, this year, over 1 million people watched the game on TV, making it the most watched programme so far this year. So you can imagine, it’s a lucrative weekend for the national broadcaster. Advertisers battle to get their brands in front of viewers, planting subliminal messages which will later sprout and grow into choices that pay dividends.

My brain doesn’t offer a particularly fertile environment for such seeds. Like many Irish parents, with a never-ending to-do list, I usually spring up during advert breaks, making the most of a few bonus minutes to get another little job done … putting the roast in the oven, making sure the uniforms are dried… you get the idea. So, as usual, I didn’t even see the advertisements during last week’s match. However, my attention was captured during the week when I saw someone on social media expressing concern that two of the half-time premium advertising spots had gone to pizza companies.

Advertising pizza during the half-time of an All-Ireland final is a genius idea on the part of the pizza companies. The match will be over about 5 or 6 o’clock in the evening. If we order pizza now, we’ll have it for when the match is over and we don’t have to bother with making dinner. Brilliant. But… and sorry to be boring here … not brilliant for our health. I have no problem with pizza or pizza companies (I very much like pizza in fact!). I don’t want a nanny state where we have curfews on when pizza adverts can be aired. I have no problem with broadcaster sales teams whose job it is to sell to the highest bidder. I understand how the world works and I understand my responsibility as a parent in being alert to subtle efforts to influence family choices. In my reflection on this issue, I seek not to find fault or assign blame. Rather, I’m curious about the dynamics of the situation.

In an ideal situation, I’d like to see some prime time advertising spots, such as those at half-time in an All-Ireland final, to be used for society enhancing messages and balanced with commercial spots which don’t promote unhealthy behaviours. I think of all the challenges our society faces in terms of obesity, cancer, mental health, road safety, suicide prevention … the list goes on. Could important societal self-care messages be “sold” during premium spots? I doubt that government agencies or patient-charities can afford such rates and I doubt that broadcaster sales teams will make their targets if they don’t make the most of every sale. In short, I doubt there is a feasible business case that could support my suggestion. But maybe we shouldn’t always need a business case to do the right thing. A friend sent me this article during the week, with that exact title!

I have been around the block enough times now to realise that “doing the right thing” doesn’t always make financial sense. I believe that everyone has a responsibility to contribute to the society in which we live. We can’t wash our hands of the country’s challenges and lament that government doesn’t do enough to save us from ourselves. There is no convincing business case for me that justifies getting up in the middle watching of an enjoyable football game to put on a roast for dinner. It would be easier, nicer, more enjoyable to stay curled up on the couch with my family whilst phoning in a pizza order for dinner. It comes at greater inconvenience to me to prepare a home-made, nutritious meal, but I do it because I believe it’s the right thing to do. It’s just annoying that the rest of the family sits salivating over a more-attractive looking pizza on the adverts, making my dinner look boring by comparison!

I don’t know what other adverts were shown at half-time last Sunday. Maybe the pizza adverts were balanced with public awareness messages. Maybe the national broadcaster does reserve prime time spots for public awareness messages that support important national priorities. Maybe I shouldn’t write about things if I don’t know all the facts. For me, the LinkedIn comment prompted an interesting reflection and, on a personal level, made me realise that I need to be aware that subliminal messages are being conveyed to my family all the time from a world that seems increasingly obsessed with commercial and financial success. At a more general level, it raises the question of how committed we are, as a society, to doing the right thing. Making the right choice the easy choice is one of the building blocks of health promotion. Last Sunday, a pizza would certainly have been the easy choice!

Can you identify times when the right choice conflicts with the easy choice? Do you ever find yourself making decisions that aren’t the “right thing” for our society, but which support the accepted norms in our world? It’s worth taking some time to reflect on whether this might be the case. Sometimes just becoming more aware that tensions exist is the first step to figuring out how to manage them.